A day pass at Universal Studios is a whopping $105 each. As there were two of us and once tax was added to the equation then the grand total was $223.66. Disney World is also expensive if you visit one of the parks for the day, but as we had paid only £303 each for a 14 day Disney World pass, this Universal price tag hurt a little bit.

It was quite a trek just to get to the ticket office. We had already walked through the car park, security and the Universal version of Disney Springs. Once we had our tickets there was one more security checkpoint where they took our fingerprints and we had to sign the back of our tickets. Both felt completely pointless… 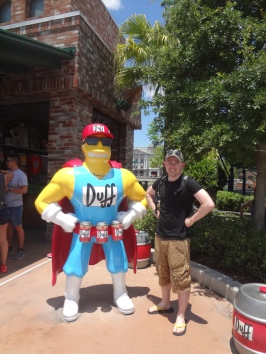 This wasn’t Disney, so that meant no Fastpasses! We had a plan and headed straight for Transformers: The Ride-3D. It was less than a 10 minute wait and it was an exciting start to proceedings! The ride was half simulator and half actual ride, as our car moved on a track while the storyline played out in front of us on 3D screens, which made it feel very real.

We headed to Krustyland next, which bowled me over with excitement. There was Moe’s Tavern and Krusty Burger, which inside was a big food court. It was here where we ate lunch a little later. I had an actual Krusty burger! The food court was badly designed though, as there was one queue for all the eateries and we couldn’t decide on what we wanted until we made it to the front of the queue and were allowed to look! I had pictures taken with Chief Wiggum and Duffman! I bought a Kwik-E-Mart name badge from the gift shop, which was named the Kwik-E-Mart. At the beginning of Krustyland is the actual Back to the Future car from the film! It’s in homage to the ride that was there before the Simpsons took over. The Simpsons ride was a simulator and I liked it more than Emma, but I am a big Simpsons fan, which is why I loved the pre show too.

Men in Black Alien Attack was similar to Buzz Lightyear Space Ranger Spin at Magic Kingdom. But with Men in Black our guns were loose, so we could hold them freely in our hands and our pod span round a lot quicker than with Buzz! Emma got a much better score than me, at around 80,000 points. Actually I think most people did! It was a poor effort from myself, only mustering about 17,000 points. We had to leave our bags and phones in a locker outside the entrance, which seemed silly. It could be a long wait without a drink. It was the same for the Mummy ride, which we decided not to go on, as Emma didn’t fancy a half hour wait for a ride she might not have enjoyed. 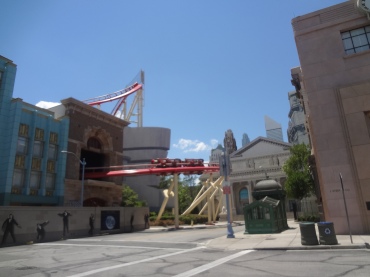 After lunch and reapplying sun cream we went on E.T. Adventure, which is one of the oldest rides in the park at 26 years old, basically the age of Universal Studios. It was a 35 minute wait, but there were several stages to break the wait up. It was a six person ride and we sat on bicycles that took us from our world (in the 1980’s) to E.T.’s world!

Shrek 4D was enjoyable and we were sprayed by water again, as we were a lot of times while on rides on Florida! It was set just after the first film, so it was fun to see another story to the Shrek saga.

We took a pit stop at Schwab’s Pharmacy where we had an ice cream sundae each. Emma had a brownie sundae and I had a cookie cookie sundae (because it had 2 cookies in it!) They cost $5.89 each and were yum! But they were too difficult to finish. I asked for a fruity ice cream to contrast with the chocolate and cookies, but the look on the woman’s face behind the counter was of pure shock at such a massive ice cream statement I was making, so I chickened out and ended up having a chocolatey ice cream. The Pharmacy was of a 1950’s style and all very vintage design. We also saw Marilyn Monroe out the window wandering about along the street having photos taken!

Our last ride of the day was Terminator 2: 3D. This was an enjoyable and exciting mix of 3D film with live action characters, but it was outdated and really needed a reboot. It could be based on the latest film or just have a different Terminator story altogether, but it was an old ride and needed a good polish. We also got wet again… 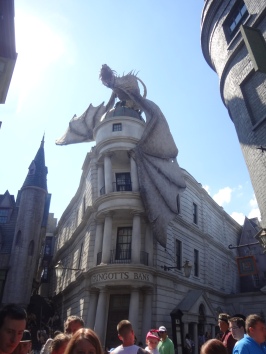 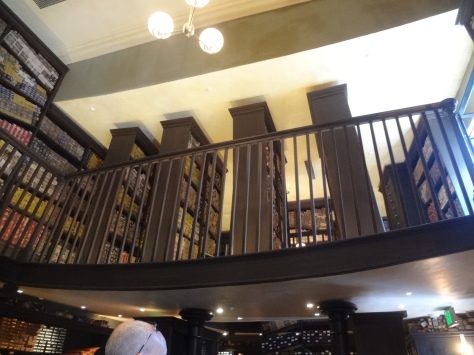 Our last act was to visit Harry Potter land which was secretly hidden away behind a wall. The hidden and very simple entrance made it even more amazing once we found ourselves in the world of Harry Potter. I liked the films but I’m far from a huge fan. Harry Potter lovers would lose their minds with excitement here. It was realistic, well designed and detailed. I liked the dragon that sat on the top of the building at the end of the main street, which blew fire every so often. I also really liked the authentic shops. The main wand shop was jam packed and wands were flying off the shelf. Metaphorically speaking of course. They had been clever with their price tags on the wands. They were $40 or $48 for a wand that can interact with things around the world of Harry Potter, which many kids wanted (and adults). Therefore most people were willing to pay the extra $8.

We had spent over eight hours at Universal and were thoroughly knackered from all the rides, walking, ice cream and sunshine. I thoroughly enjoyed it and loved a lot of the rides, but it still came up short against Disney World. But it has a second park, Islands of Adventure, which is linked to Universal Studios by the Hogwarts Express, as well as Universal CityWalk and a new waterpark that is scheduled to open in 2017. It is doing it’s best to give Disney some competition.