Each theme park in Disney World is so distinctive that they all have their own character and feel. Animal Kingdom was the fourth park to open and it did so in 1998, only a couple of months before Emma’s first visit to Disney World!

Like Epcot with the Epcot ball, Animal Kingdom has it’s own centrepiece, the Tree of Life. It stands in the middle of the park, but is one of the first things you see after entering before diverting in whatever direction you prefer. The Tree of Life is an enormous fake tree that has hundreds of animals carved into it’s trunk. The leaves are not real but the green of the leaves and grandeur of the tree make it look almost animated or painted into the landscape. There’s even an attraction underneath the tree – It’s Tough to be a Bug. This is a 3D film and live show inspired by A Bug’s Life that is fun and interactive. Like many of the rides and attractions in Disney World it isn’t just for children, as it is scary in places and the realism and interactive nature of the show could be too much for some children. 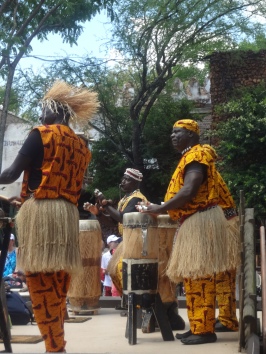 The tree is on Discovery Island and there are three other areas to explore. Dinoland U.S.A has a lot of attractions that are educational and for kids. There was one ride that intrigued us, called DINOSAUR. The pre show leads you into being sent back 65 million years to the time the meteor hit the earth in order to bring back a dinosaur for a scientist. The mission goes wrong, which leads to a scary, dark and loud ride where you encounter a lot of dinosaurs and darkness! I think it could have been better, as there was a bit too much noise and darkness to really appreciate what was happening.

Next to Dinoland is Asia, which is where we had lunch on both visits to the park. It was at Yak & Yeti cafe, the restaurant attached to it was too expensive, so we were happy to buy some Asian style food and sit outside. I enjoyed the food here, the honey chicken was tasty and so was the teriyaki beef bowl.

One of the two major rides in Asia  – Kali River Rapids was a very short and wet ride. Emma screamed every time she got wet, which was more than the other five of us in the raft! I liked it but it ended way too quickly. The other ride was Expedition Everest. Emma decided against this one, as she didn’t like the look of it, but I was feeling brave, so joined the single person queue as that was quicker than using my fastpass. I regretted my decision when the rollercoaster stopped at the end of the tracks which had been ripped up by a pissed off yeti. It then went backwards into a tunnel, in complete darkness…not knowing where I was going made my stomach churn and I was happy once I was heading forwards again in the sunlight, even if it was a big drop at high speed!

Africa is the last land to explore and my favourite. We watched the Festival of the Lion King, which was a bright, colourful and joyful extravaganza of song, dance and athleticism. I liked the Tam Tam drummers of Harembe which were in the centre of Africa playing drums and getting people to join in with the dancing. One drummer was always blowing a whistle and sweating, with his eyes wide and fixed in concentration on his drumming.

The best part of Africa is Kilimanjaro Safaris. Very knowledgeable drivers drive a truck load of people around a large expanse of land filled with all kinds of animals you would see on a safari in Africa, lions, giraffes, wild dogs, elephants and many more. Some of the facts are saddening such as the white rhino in recent years has been brought back from extinction, only to find itself near the brink again.

If you want to see more animals at your own pace then there is the Pangani Forest Trail in Africa and the Maharajah Jungle Trek in Asia. It’s nice to walk around them at your own speed. Both have bird sanctuaries with wonderful specimens of exotic birds. I loved the Fairy Bluebird and the surprising amount of exotic pigeons, like the Pied Imperial, Nicobar and Crowned Imperial pigeon.

There’s so much to learn, explore and enjoy in Animal Kingdom. You should try and take your time while walking around the park, otherwise you might miss something, like the gibbons that live in the Cambodian type temples near the Kali River Rapids. Disney are so clever in so many things that they do all around the park, such as using hidden ditches and water to make it look like the animals are free to roam.