It was actually Monmouth that we were visiting, but there was no accommodation to fit our needs, so we booked a couple of nights at the Premier Inn just a two minute drive from Ross on Wye. 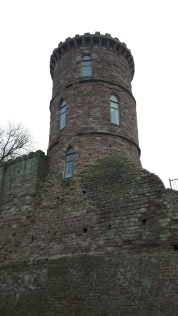 Although we stayed in Ross on Wye just for accommodation purposes, it is still a town worthy of visiting in itself. We had a meal and a breakfast at the Wetherspoons, called The Mail Rooms, named so because it was a sorting office before it became a Wetherspoons. It closed in 1999 after being open for an entire century. Even though it wasn’t the nicest looking Wetherspoons, with a slight leisure centre feel, it still did the job for us. Although I couldn’t have a vegetarian breakfast as they had run out of Qourn sausages! This was also the case at the Wetherspoons in Monmouth.

The town was not as quaint as Emma was expecting, but it still held a certain charm. The Market House, built in the 17th century still serves as part of the market, but it’s not big enough to house all the stalls and the market spills out in front of it.

Gazebo Tower is just up the street from the Market House. A grade II listed building built in the 19th century, it was a lookout tower for the town of Ross, but now is a holiday home for the current owner and is open once a year for the public. The old town wall that runs past the Gazebo Tower has many nooks and crannies that have been taken up by pigeons using them as nests or just as shelter from the weather.

Ross has several pubs and restaurants, including an Indian restaurant where we ate on one of the nights. There’s also a map of the town next to the Market House which is nicely located to assist you with choosing where you want to go. The town is also a gateway into Wales and the surrounding area and we used it as a base to get to other towns and attractions.

One thought on “Ross On Wye – A Gateway to Wales”