Our Wales trip was coming to an end but we didn’t want to go straight home, so we took a detour north towards Hereford. It was only a thirty minute drive from Ross on Wye. We parked in an old multi-storey car park with slightly too small spaces and very tight corners. We thought this would have been the best place to park, as it was where we were directed to when we Google mapped Old Market Shopping Centre. To our dismay we noticed a nice open car park next to all of the shops that had very spacious spaces. Oh well, we live and learn! 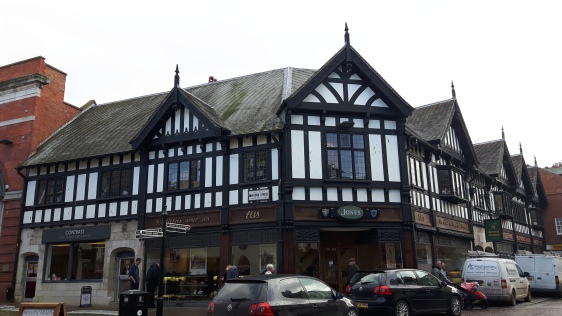 The Old Market shopping centre and the Maylord shopping centre were both pretty much outdoor, which is something we don’t particularly like, as England is known for bad weather, so having a roof on us at all times just makes sense.

After an average start, the city of Hereford got better. We cut through the Maylord Shopping Centre and the streets opened up. Old buildings began to appear, which had great character and architecture. The Old House in the Square is a stunning 17th century building that is now a museum. In front of the house stands a life sized bull statue, which is an unusual place for it, but I think the contrast of the modern bull statue and old timber house works well. 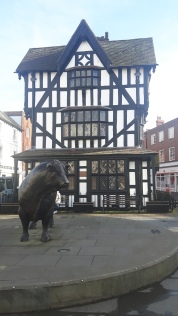 The best spot in the centre for me was the cathedral and its grounds. The cathedral itself is magnificent and grand. I don’t like the religious side of cathedrals but I do love the history and architecture. I went inside for a few minutes to have a look around and admire the grandeur of the building. But the drone of the priest speaking about something religious drove me outside. The cathedral grounds are well kept, peaceful and quiet. A statue of the composer Edward Elgar is situated in a lovely spot, he is leaning against a bicycle and is staring almost lovingly at the cathedral.

There are other gems dotted round the centre, such as another black and white building, that appears to be from the same era as the Old House, which has several shops underneath it. Next to this is the Buttermarket where you can buy a variety of items from fruit and veg to birthday cards. If you keep walking south past the cathedral you’ll reach the lovely River Wye and the old bridge on St Martin’s Street.

Hereford has room for improvement, but if you’re in the area then it’s a city that deserves a visit.

One thought on “Hereford”