We visited Lincoln Christmas market last year for the day and thought how nice it would be if we went again this year, but stayed for a couple of nights. So we booked ourselves into the city centre Premier Inn for two nights. We arrived on the Sunday, which was the last day of the market. It was busier than last year, most likely because we went on a Friday last time and the weekend days are busier.

We arrived before it opened so we could guarantee a parking space in Broadgate car park behind the Premier Inn. We enjoyed a Wetherspoons breakfast at the Ritz and were at the Christmas market not long after it opened at 10am. Being there from the start meant we could take a break later in the day by resting in our hotel room before going back out to enjoy the festivities at night.

There was a great atmosphere all day, with a lot of stalls, people, music and choices of food and drink. The cathedral always looks spectacular, but even more so at night when it’s lit up. The Christmas tree in front of it made it even nicer, with plenty of people wanting their photo taken next to it. Small performances took place outside the castle walls, where we saw a dance society do some silent dancing and a group of kilted musicians raising money for charity. 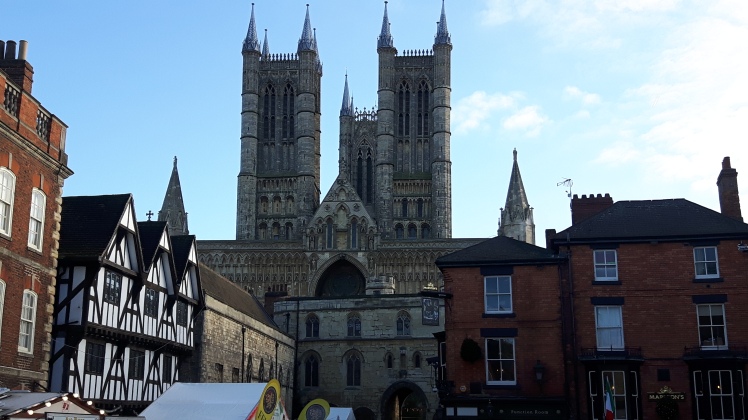 We’re sure the medieval market was a voluntary donation last year to get in, but this time we had to pay £1 on entry. No big deal except part of it was closed off this time, but last year there was an area that could be accessed that led out onto some grass with great views over part of the city.

The food – we ate roast pulled pork cobs for lunch with apple sauce, which was enjoyable although the apple sauce tasted watered down. We bought a huge danish each, which we ate later in our hotel room. We had one last year and remembered how scrumptious they were! In the evening we had a hot chocolate each, mine a regular and Emma’s had bailey in. We bought them from one of the stalls in the castle grounds, ran by about 5 older men who were dressed for the season and were a bit all over the place like it was their first day on the job, not a couple of hours before this year’s market closed. But it was funny and we were glad we went to them for our hot drink and pleasant conversation.

We still had a couple of days in Lincoln after the Christmas market, so we had time for Christmas shopping on one day and the next we wandered round the top of the town to see how different it was now the market was gone.

On the last day we had tea and cake at the lovely tearoom Bunty’s. It was on Steep Hill, a small establishment, which made it cosy. The place was well designed with it’s vintage feel and friendly staff. We’re clearly not the only people who liked the place as it was full when we were there and people kept trying to come in. 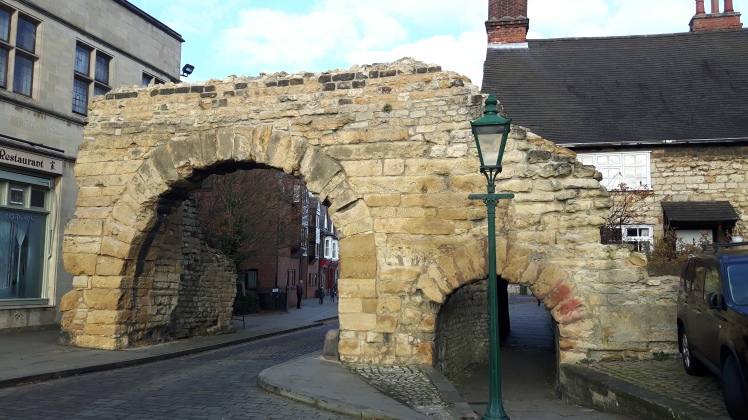 Somewhere you don’t want to go though is Wagamamas. People seem to love the restaurant chain, but whenever we have visited we have always been disappointed. This was our last attempt. Emma’s meal was left out on the side, so went cold, there was a horridly fragranced and spicy thing on our meal that wasn’t mentioned on the menu and the desserts were poor. We’re not too sure what people like about the place.

We always enjoy our trips to Lincoln. I could spend all day walking around the top of the town, which I see as the old town, exploring the cathedral, castle and Steep Hill.