When we visited Hardwick in late January it was cold, quiet and both the new and old halls were closed. We also wanted to see the herb and other gardens to see what had grown and flowered, as in January it was just soil and labels of what would be growing.

We took lunch with us this time and sat outside at a picnic table to eat it. When the sun was out it was hot, but when it went behind a cloud the wind picked up and it was really cold! It was quite frustrating weather.

We headed to the new hall first. I was excited to go round it, as I haven’t been in it since I was a child. Most rooms smelt like wheat because of the type of carpet on most the floors. There were a lot of interesting tapestries, paintings and rooms to keep us occupied.

The old hall is run by English Heritage, but as we are National Trust members we could go in it for free, as the new hall is run by the National Trust. The old hall was only built a few years before the new hall in the late 1500’s, but you wouldn’t think so looking at the state of the old hall. It is just a shell of a grand building. the roof is gone and so is most the ceilings and floors. There was still a staircase to walk up to the top and enjoy the views of the countryside. 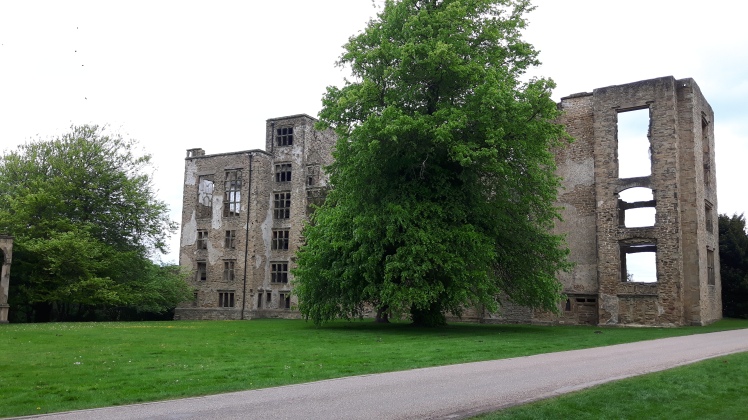 We went to the cafe afterwards for a pot of tea each and we shared a chocolate twist that we had bought that morning from Lidl. Before leaving we had a ganders in the garden shop, which we didn’t do last time. Hardwick is a great place to visit in the winter as well as the summer, but if you do only visit once then make sure it is when the halls are open and when it’s a nice day as there is so much more on offer.