My 30th birthday is approaching and it’s making me reminisce about previous birthdays. One that springs to mind most often is my 25th. We were travelling around the world, starting in the USA and had then reached New Zealand. After a couple of eventful days in the earthquake stricken Christchurch, our next destination was Queenstown. The way the dates had fallen it meant the flight to Queenstown was on my birthday. Emma had asked if I was sure that I wanted to take a flight on my birthday, but I didn’t mind as it was a short domestic flight and the views were meant to be beautiful as the plane comes in to land in Queenstown. So I thought that would be quite an experience for my 25th!

The previous couple of days we had been concerned about the volcanic Icelandic ash cloud that was affecting flights all over the world. However, the company we were flying with (Jetstar) had not cancelled our flight, so we thought we would be okay.

Everything went to plan at first. We took the supershuttle at 6:15am to the airport and made it in good time for the 8:15am flight. However once we went through to the gate we were told the flight was delayed due to an engineering issue. After waiting around for a while not knowing what was going to happen, at about 8:25am they announced that the flight had been cancelled and we needed to collect our bags from baggage claim! 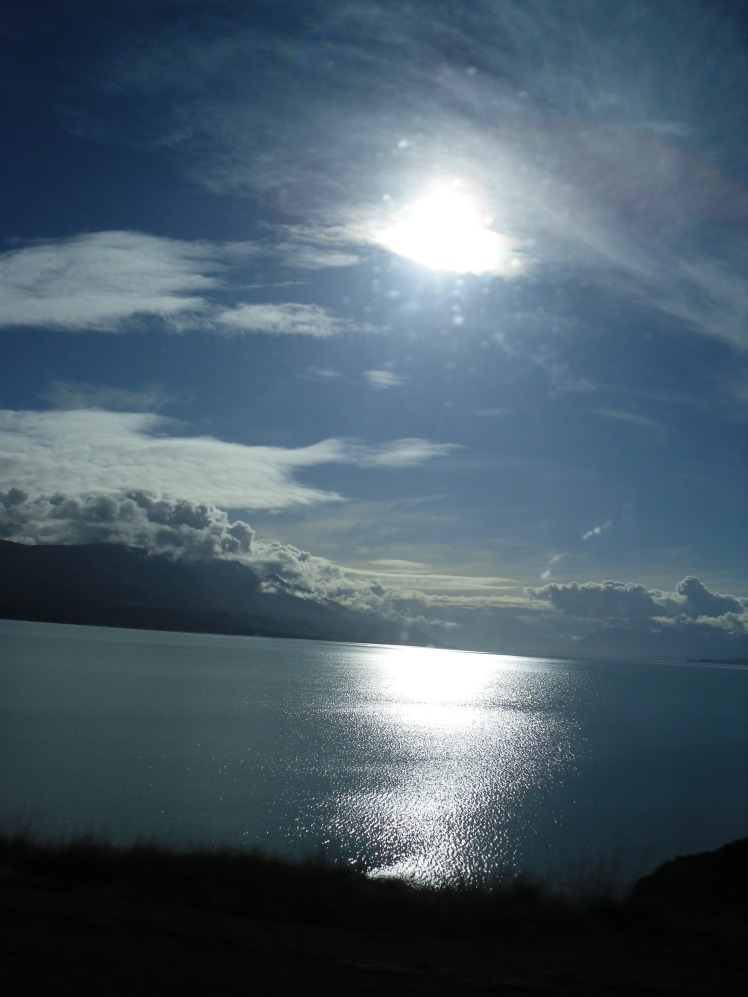 There was a lot of confusion, no apologies from the airport or Jetstar staff and hardly any information was being handed out to us. All we knew was that if we wanted to get to Queenstown that day we needed to queue up for the bus replacement service! We were meeting my mum in Queenstown that day, so the bus was our only option. She was taking an Air New Zealand flight from Auckland which went perfectly smoothly, as Air New Zealand were flying below the ash cloud and had proper planes, unlike the shabby ramshackle company Jetstar.

I tried to see the irony, in that we were really concerned our flight would be cancelled because of the ash cloud, but it ended up being random engineering issues instead! But frustration took over as the 8:50am bus showed up at 9:25am!

The bus journey took about seven hours and at least we got to see some great scenery. A lot of it reminded me of Derbyshire or Wales. We had a toilet stop in the relatively pretty town of Geraldine and swapped drivers soon after Lake Tekapo. This is where we stopped for lunch at a cafe that had an “airport diversion” menu. A menu that was laminated! So this was obviously a common occurrence for the likes of Jetstar. Everyone had a $20 allowance, we managed to spend $16.50 each. It was okay, but I hoped for a better birthday lunch.

We arrived in Queenstown a few hours later and were dropped off at the airport. We took the bus into the town, which cost $6 each. The bus driver was young and extremely chilled. Stereotypically kiwi, I believe. Within seconds of stepping off the bus my mum appeared with a big smile on her face. It was a relief to see her and be in Queenstown, though it was eight hours later than planned.

The rest of my birthday was much better. We stayed in a small but cosy room with a beautiful view of the city. We had a nice meal and explored the town which was buzzing as the winter festival was taking place. There were big crowds, music, food stalls and excited people.

So my 25th did not go at all as planned, but I got to see more of the country and it ended well. But that is travelling – you have your ups and your downs, but they all create good stories and memories that stay with you forever. We also managed to get our money back from Jetstar, although it was quite a lot of months later.