Ciutadella was the capital of Menorca as far back as the time of the Romans, even after the “disaster” of 1558 when the Turks decimated the city and sold every inhabitant into slavery. It wasn’t until the 18th century when the British moved the capital to Mahon on the opposite coast of the island.

The bus from Cala Galdana to Ciutadella cost €2.60 each and took around 30 minutes. We didn’t make the same mistake as our bus trip to Ferreries the day before, by leaving toys connected to the pushchair when we put it in the bus compartment underneath getting them really dirty.

The city of Ciutadella had plenty of beautiful old buildings that were well maintained and visually stunning. The main square had a huge oblesik in the centre, surrounded by stone benches (no back rest, so bad for breastfeeding). The tourist information was in a grand building as also used for weddings and it was next to the viewpoint overlooking the harbour.

We did find a circle of benches that were suitable for breast feeding and they were nicely shaded too. It was a good time for a rest from the sun and we had just purchased cold drinks from a shop that smelt strongly of cheese as there were big round blocks of it sitting out on the counter.

We both had a gelato, making us reminisce over our trip to Italy back in 2015. Even though Emma went back for a 2nd helping gelato in Rome was probably better. 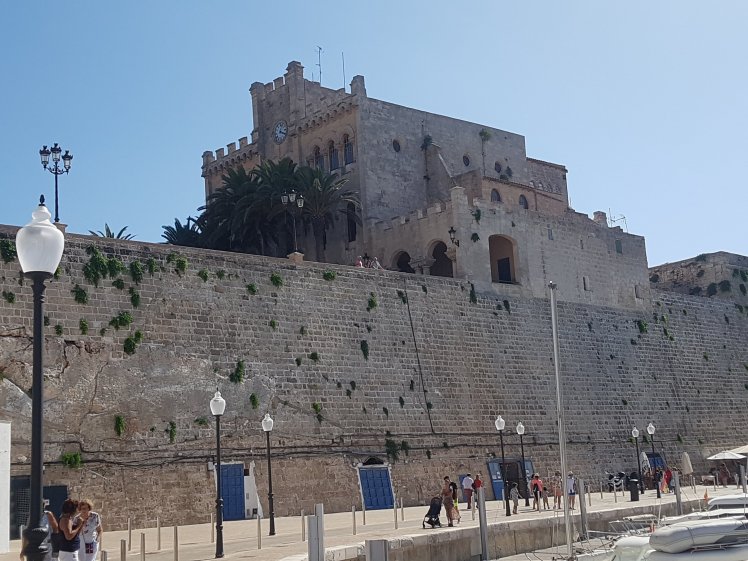 There’s plenty to see and explore in Ciutadella with its history and marina. There were a lot of places to eat down at the water too, as well as photo opportunities. We wished we had more time to explore, but we now live on baby restricted time. If you are in Menorca then Ciutadella is a must explore destination.