We have not been to a zoo since we visited Bangkok Zoo in 2011. Madrid Zoo was a must visit because they have pandas! We love pandas, especially me and we have never seen any in real life. The zoo is on the outskirts of the city and was easily accessible via the metro. It took us half an hour to reach and we only had to make one change from Sol, which is where our hotel was. We got off the metro at the Casa de Campo stop and then had a ten minute walk to the zoo. 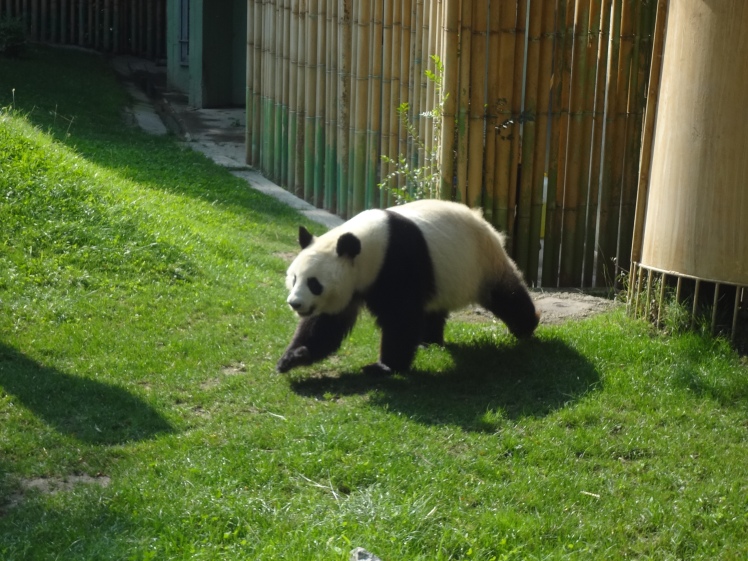 It cost us €46.60 for the two of us to get in. It was rather quiet early on, which was good as our first stop was the pandas that were not too far from the entrance in the area of China. The zoo was split into different zones such as China, Africa and Asia, but these areas were not listed on the zoo map, which made it more difficult to understand where we were.

I loved seeing all the animals, especially as my favourite animals were in this zoo; pandas, rhinos and tigers! The pandas were of course the highlight, sadly they were not active enough to do anything funny (panda style) but it was great to see them. There were Indian rhinos and white rhinos, which were in two separate areas of the zoo and there was a Bengal tiger and a white tiger together, but they were just sleeping to avoid the heat.

The reason it seemed quiet early on was because it appeared everyone but us were watching the seal show. So we joined them and it was quite entertaining to see the seal do a few tricks with its trainer. Once the show was over then it was very busy as people left their seats. There were a lot of shows taking place one after the other around the zoo. We attended the dolphin show and sat in the back middle of the stand to get the best view. It was amazing to see what the dolphins could do and how the trainers controlled them with simple movements of their hands and arms.

There were several restaurants around the zoo, but not all of them were open and there were a lot of ice cream stalls but all were shut. We had lunch at Burger Virunga, which didn’t open until 1pm, which was when the dolphin show finished. We both had a burger, chips and a drink which was €9.99 each. One of the restaurants close by, Restaurante A La Carte Bagaray was closed and looked like it had been closed for some time as there was a lot of leaves on the chairs and tables. Quite unusual to say it was only early September.

I do love zoos, as I love to see all the wild animals, but with any zoo we’ve been to it does seem to be the same situation where the animals never have big enough enclosures. The tigers appeared to have more water than land in their enclosure, some of it was needed to keep the tigers in, but some of the water was unnecessary.  It’s great to see such a variety of animals but I feel it would be better for a zoo to have less animals that have more space. Also I’m sure some animals could almost escape if they put their minds to it, especially the grizzly bears! They had about a five foot jump and then they would have been free! And three of them stood on the edge staring at us tasty humans looking like they were willing to give it a try…

5 thoughts on “Madrid Zoo and Pandas!”